Story and images by Deborah Sleight

The Tarra Valley Loop is section three of the Grand Strzelecki Track, it is a 22km loop starting at the Tarra Bulga Visitor Centre in Balook. Before doing this l would say the Mt Tassie Loop was the hardest section l had done so far but now l say this was the hardest so far. It killed me on the descents, and the last 5km felt like 10km. I started the hike at 9am, it is just over a two hour drive from my place. The Visitor Centre has a beautiful spot to stop for a picnic, with toilets and picnic tables. But l needed to move it because this hike was going to take close to eight hours to walk. 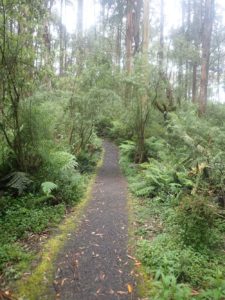 I decided to go anticlockwise so when l got to Drysdale Track l was going down the step descent and not coming up at the end of the hike where l know l would be struggling nearer the end. I followed Link track out of the visitor centre and decided not to do the extra 4km hike to the bridge as l have done this on a previous hike. After link track you walk along the road until you see Telecom track on the left side of the road, this track also takes you on the Mt Tassie Loop, so l have done this part of the track before. 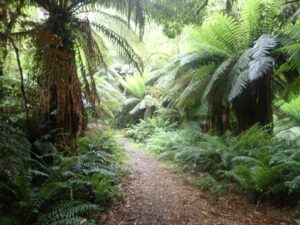 You walk through giant mountain ash trees along this section. It isn’t long until you reach Drysdale Track which you turn left onto. Not far down you come to a camping area called Drysdale Morningside, l wouldn’t want to camp there as it’s pretty overgrown with weeds and no flat areas to pitch a tent. 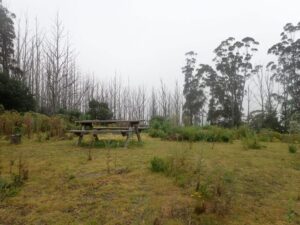 I came across lots of Lyrebirds but they are too quick for me to get a good photo of one, l even got to finally see one fly and the noise they make to let others know you are there actually sounds like an alarm going off, so loud. I also finally heard a Strzelecki koala in the trees but l couldn’t see him, most of the trees are pretty tall, he was up there somewhere. But at least the wombats are not as quick so l was able to get a photo of two of them that l saw on this hike, but boy can they run. 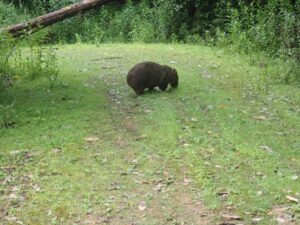 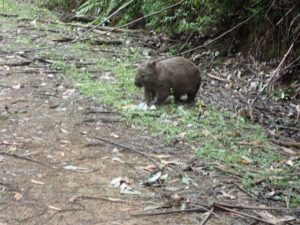 The track so far wasn’t too bad but that soon changed when l reached Duncans track which is a steep climb, and this is where l wish l had my gaiters because of the leeches and long grass. 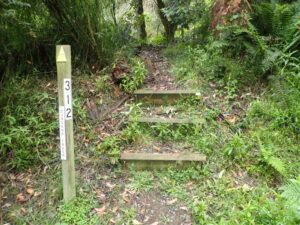 This section killed my right hip, and for the rest of the hike it was quiet sore. I came to a detour because of logging works which was a little sad to see. The detour was only short thank god because l felt l was bush bashing to find the track. 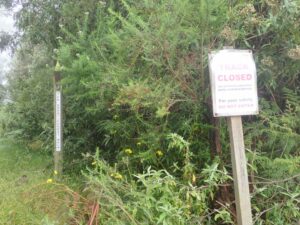 I got to the Great Forest Walk which l had to go down as there was no other way to get to Tarra Valley picnic area where l would be stopping to have some much needed rest and lunch, I’m pretty sure the sign that said Track Closed was in the wrong place, well l was hoping it was. The climb down this track was just as bad as Duncan’s Track going up, but so much longer, when l saw that picnic area l was one very happy lady. 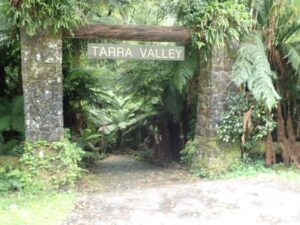 I didn’t sit there for long because it had taken me over four hours just to get to this halfway point l was a little concerned that l was going to be finishing the hike in the dark if l didn’t move it. I even contemplated asking a couple that had driven in if they would drop me back at my car because my hip was getting worse and l was struggling on the hills. But l stuck it up and pushed on. The last 10km wasn’t as bad but it was a slow incline so not much flat ground to walk along to give my hip a rest. Again l saw more lyrebirds and another big wombat and heard more koalas in the trees. 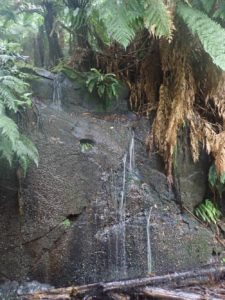 I actually wouldn’t recommend this hike as l really didn’t enjoy it that much. Maybe it was because of the pain l was getting in my hip, or the leeches on my legs. I was definitely glad l didn’t have someone with me as l think l would of struggled with my emotions because of my hip pain and having to stop lots. I actually felt drained at the end of this hike, I’ve never had so much pain coming from my hip before so it did concern me a little. 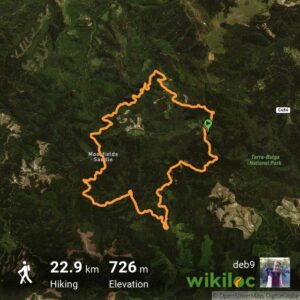 There wasn’t any beautiful views like the Mt Tassie hike and no beautiful scenery like on the Macks Creek hike (two of the other sections I’ve done). If you are going to do one section then l would pick one of those instead or maybe section one, Billy’s Creek (can’t wait to do that one). I have two more sections to do of the Grand Strzelecki Track, l just need someone to come with me on those ones as they are not loops and apparently the first section (Billys Creek) is the hardest out of all of them but also the best, and it has over 57 creek/river crossings. I’m thinking of doing both sections as an overnight hike as it would work well doing them that way.

Anyone want to join me?

Thank you Deb for sharing your experience.

Published with permission by Deborah Sleight from her blog ‘Deb’s Hiking Journey’.