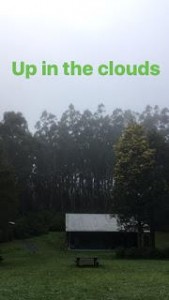 Story and images by Daniel Broadbridge

There were three of us; Glenn, Matt and myself (all Sale and District Runners), who decided to go for a run in the Park, because if you need to do a long run, why not do one where there’s stunning scenery and some gnarly hills to match?

We are all from Wellington Shire (about an hour away from the Tarra Bulga) so we didn’t have to get up too early to get out running in the morning. We arrived at the Visitor Centre in Balook at 7.30am, to find out we were the only there (which isn’t surprising), only to step out of the car and immediately froze our butts off. It was about 13° C when we left home, the car thermometer when we stepped out of the car said it was 7° C. So just a tad bit chilly. But man, it was stunning looking out over the Visitor Centre from the car park. The cloud was quite stunning that morning, and hung like a shroud over the trees. Beautiful. And I knew at that moment I was going to be in for a good run. We went off in the direction of Bulga Road, then jumped onto the Grand Strezlecki Track which led us to Diaper Track, which was stunning and easy to run along. It was all downhill and soft underfoot due to all the leaves and twigs, which was pleasant to run along. We did have to watch where we put our feet so we didn’t trip over a twig though! Along Diapers we saw some unmarked waterfalls, crossed some streams and splashed our way through the mud. It was like I was a little kid again! It was also good that it was fairly easy to run along, as we needed to be well and truly warmed up for what came next…

Diaper Track finished onto Tarra Valley Road after descending 300m in 7km, where we then sought out ‘Butlers Track’. ‘Butlers Track’ is apparently a part of the 50km in ‘Duncan’s Run’ and none of us had run/walked it before, so we had no idea what we were in for. First off, it was steep; but we each had some good hill climbing fitness so that wasn’t too bad. What was really difficult was the terrain itself. The forest floor was very wet and littered with tree debris. Bark, twigs, small trees, logs, you name it, it was there. This meant when I put my foot down, I struggled to lift it back up again; but hey, a challenge is always nice and it was such a good feeling once we reached the top! And what goes up must come back down and, boy-o-boy was it fun to run down the other side of that hill. 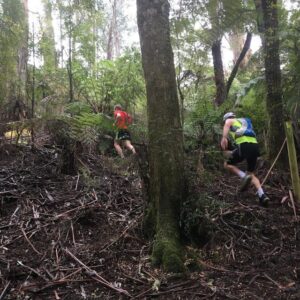 Butler’s Track is part of the ‘Grand Strzelecki Trail’ and without the amazing trail marking that they did we would’ve for sure gotten lost, so thanks for that! 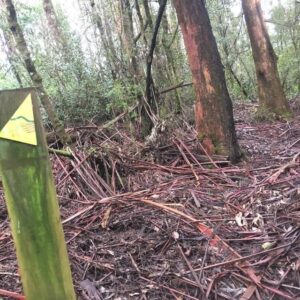 Butler’s Track links up with the ‘West Face Track’, which for the first part was very muddy. Glenn actually took quite a big fall! Kudos to him though, he kept on going. It was also at the beginning of that track that Glenn and myself had found leeches attached to us. They came off easily enough but it’s funny seeing how much blood they can suck without me feeling it at all. Matt was the lucky one and seemed to get off scot free, but it’s all part of the fun right?? West Face Track also goes up a huge hill, but it goes up over the hill over a longer distance than Butler’s (Strava tells me it has a grade of 10%) that made it a little easier than the last one. What also made it easier was the fact that the majority of it was dirt/gravel instead of forest floor. In order to make the hill go faster we turned it into a bit of a fartlek session, where at random intervals we ran a bit, then walked a bit. All the way to the top. Once we reached the top we got into a bit of a clearing, where we discovered it was windy which was a bit of a shock to the system since it was ice cold. The trees protected us so well! At the top there was also a picnic table that was in; what I think, a bit of a random spot. It wasn’t really at a lookout point, but that wasn’t the strangest thing. No, next to said picnic table was a bunch of daffodils. But nowhere else. They were beautiful though. 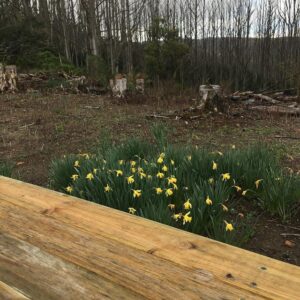 When we turned right onto ‘Basement Track’, which was all downhill and meant that I could stretch out my legs again after slogging it uphill for so long. This led us back onto Grand Ridge Road, where we stopped to take our obligatory ‘selfie’ and where I also met the secretary of the Grand Strzelecki Track (who asked me to write up something about this run, hence the blog post!) From there we went back to the Visitor Centre along Scenic Track, which ended our almost 3 hour, 22km adventure!

Ridiculously wet, bruised, and a little bit bloody, we sought the refuge of the Tarra Bulga Guest House and Café to warm ourselves up by the fire and fill our bellies with hot coffee and delicious home cooked meals. To my delight some scones had been freshly made and really hit the spot. Yes it was tough, cold, wet, muddy and tiring but the scenery well and truly made up for it. Ancient trees that tower above you, the fresh air, stunning valleys and waterfalls all add up to make this a part of Gippsland that you simply must visit! 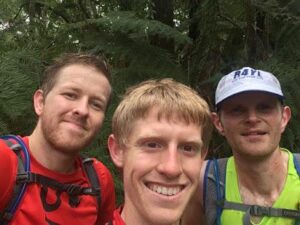 Thank you Daniel for sharing your experience.